Most 5G technologies require many, many, more wireless antennas to operate effectively when contrasted with existing systems.  These antenna units (the size of small backpacks) can be attached almost anywhere – light and electrical poles are natural candidates.

Cities and utility companies traditionally have granted access rights to ISPs and used the proceeds as revenue generators – to fund all sorts of things including but not limited to public access to broadband.

The FCC regulation challenged in the lawsuit imposes some monetary limits on fees charged by municipalities and limits their right to prohibit deployment on city and private utility right of way.

If you talk to ISP’s pushing 5G deployment they will say this is a very good thing; however, the FCC regulation it does eliminate a source of financing municipalities could have used to raise funds to help bridge the digital divide in communities and to expand the use of smart government applications. Like most everything else in this area – it’s complicated. 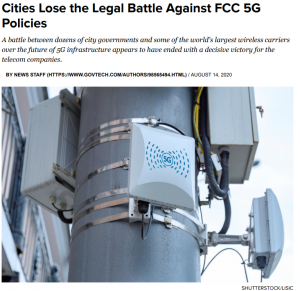